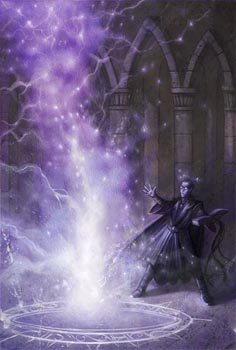 Secondary color, first-class magic.
Radiating from the book was the light that lies on the far side of darkness, the light fantastic. It was a rather disappointing purple colour.
— Terry Pratchett, The Light Fantastic
Advertisement:

Whether it's magic, psychic energy, or wizard clothing, purple is often the color that represents these.

It's not the only mystical color, but in fiction, it's one of the most common, regardless of whether the color shows up on the good guys or the bad guys (although the latter is a bit more common thanks to Good Colors, Evil Colors and Purple Is the New Black).

One possible reason for this is the fact that very few things in the world (or the universe, for that matter) are naturally purple, so it will stand out against the scenery no matter where on Earth (or off Earth) your story takes place. Purple dye was once expensive and limited to royaltynote Simply combining red and blue pigments rarely produced a desirable shade., so the color has always had "lofty" connotations.

This is one reason purple is one of the Common Mary Sue Traits (and Graceful Ladies Like Purple).

Can often overlap with Purple Is Powerful.

A Sister Trope to Gravity Is Purple and Supernatural Is Green.

Compare Gold and White Are Divine and Emerald Power.