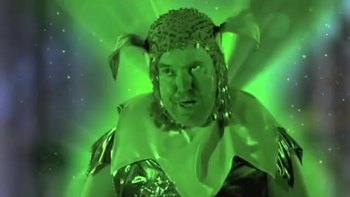 They don't call him the green fairy for nothing!
"Green is not a creative color."
— Sketchbook, Don't Hug Me I'm Scared
Advertisement:

Green, when not portrayed with landscapes and vegetation, is often associated with mysterious or mystical powers in fiction. A specific way this manifests is aliens, ghosts, witches, zombies, or other paranormal or supernatural entities having green eyes, green skin, and/or just a general aura of green about them. Since nothing naturally emits green light, choosing that as a color scheme for otherworldly creatures is a good way to indicate their unusual nature.

Sub-Trope of Emerald Power and Sickly Green Glow and Super-Trope to Green-Skinned Space Babe, Little Green Men, and Undeathly Pallor. Sister Trope to Supernatural Is Purple. Compare Green Is Gross, for when the color green is used to denote disgusting things and may overlap with this. Contrast Green Thumb, when the color green denotes the natural world.