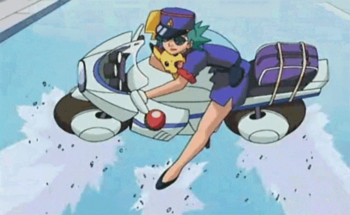 And that's how you save a Pikachu with style!
"I customized that bike for myself! It's too wild for you to handle."
— Shotaro Kaneda (to Tetsuo Shima), AKIRA
Advertisement:

You are a Badass Biker and you want to enter with style with your two-wheeled monster. Want to stop it with style and look as cool as possible? An easy way to do so is slamming on the brakes so your bike skids away from the camera, perpendicular to the direction of the skid and angled so that both the side and top of the vehicle are visible until it stops (and if the slide includes lightning, much better). This is what this trope is about: a bike slide stopping with style, a way to cement your driving skills, or your status as The Hero of your show.

, when after Kaneda defeats the leader of the Clowns and makes this sliding stop. This is more known as the "AKIRA bike slide", which was the previous name of this trope. Even when the bike slide was a resource used before, it wasn't until this anime movie that the shot became homaged/parodied in more ways than you think

Sub-Trope of Stock Shout-Outs and Homage Shot. If you can do this, then you're a Badass Biker, or even a Badass Driver if you can make it in four wheels as well. Also, this is a good Dynamic Entry and/or Big Entrance if you're on two wheels. Bonus points if your cool stop is done with a Cool Bike. Of course, this is made as a Rule of Cool for fictional works only and doesn't take any issues of Motorcycle Safety, so Don't Try This at Home!note The most common risk to attempting this is what is known as a "lowside crash", where the bike slips out from under the rider and both end up skidding along the ground, with the bike "leading" the skid; however, it can also easily result in a "highside crash", in which the bike (usually through the tires suddenly finding traction in the road such as a rough spot or sudden pothole) violently flips over into the direction that the vehicle is skidding, throwing the rider with it so that the rider is the one "leading" the skid, which is extremely dangerous; neither situation is ideal, but "lowside" crashes are considered to be the "safer" crash because the bike can cushion the rider from impact of anything in the way, and is at much less risk of crushing the rider, which is a very real risk during a "highside" crash — not to mention that the rider will be the first thing that hits any obstacles in the way, which will usually be followed by the motorcycle smashing into the rider.