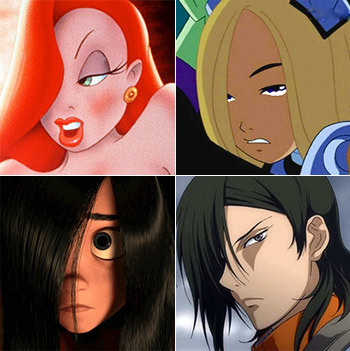 Common in modelling as well as fiction, this is when a person's hair intentionally covers one of their eyes. Sometimes it's just for style, while other times it might function as an Eyepatch of Power, or cover a disfigurement such as horrible scarring or a blind eye (in which case its removal may serve as The Reveal).

It frequently serves as some kind of symbol:

In Real Life, the style is called "peek-a-boo", or, more recently, "emo bang", and was popularized by Veronica Lake in the 1940s (who was asked to change it when it proved impractical for women working in factories during the war).

It may only happen for one scene, or it may be a permanent feature of a character. May be a consequence of Slipknot Ponytail. If the style sticks through all sorts of action, it veers into Improbable Hair Style territory.

A person with this hairstyle may also be victim to some of the same jokes as characters who actually have only one eye, such as lacking depth perception. A common emo hairstyle for males also features this and calls it emo fringe.

Contrast Hidden Eyes, where a character's eyes are temporarily in shadow to indicate a change in emotional state — this is usually a more permanent effect and can mean many things.

For the real use of hair in a Scenery Censor situation, see Godiva Hair. Compare Oddly Visible Eyebrows.

◊ around the time the album With Teeth came out.