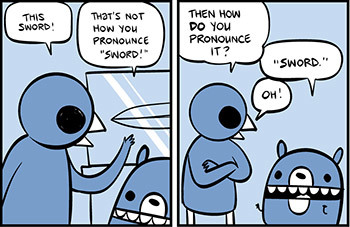 Thanks for reading Only-Works-In-Comics comics.
"When in doubt, be sure to pronounce everything in the least affected manner possible, from an American perspective."
— Andrew Hussie
Advertisement:

In written works, sometimes it's not obvious how to pronounce names that are given. Sure, it's easy enough to figure out how to pronounce John Smith (usually), but seeing the name Gauthenia Vrellneick is going to confuse the heck out of anyone (probably).

This can cause issues when people try to actually discuss a character in the work, and nobody can figure out whose pronunciation is actually correct. There can be quite a bit of Fan Dumb resulting from this, often depending simply on the language construction of where fans live. When the work is a voiced work (anime, film, some video games), it might get worse as the (voice) actor might be pronouncing them in a way some fans see as wrong (again, depending on where they live).

Don't expect it to help any when there is finally Word of God on how to pronounce some of them — it might end the discussion, or you might get folks arguing over whether or not the person who answers is correct anyway. Fanon has been known more than once to override the author's intended pronunciation.

The opposite of Spell My Name with an "S", where fans know how it's supposed to sound (since it's on video or named in a syllabary) but can't seem to agree on how it's supposed to be written down alphabetically. With the growing trend of audiobooks, this can even happen in literature. Related to The Unpronounceable, where the names are intentionally difficult (if not downright impossible) for the mere humans to pronounce.

This is extremely common in English dubs of Anime in general, although the severity of it depends on the dub studio or even the specific voice director. This causes a certain (very loud) segment of the fandom to completely lose their shit when it happens. The reasons for mispronunciations or mis-stressings (no, they are not the same thing) of Japanese words are myriad, ranging from the translator not giving any hints on how names are pronounced, directors not being terribly concerned about it, edits from the Japanese themselves (this one happened with Eureka Sevennote Where the title character's name is "officially" pronounced "Eh-oo-reh-ka".), to the simple fact that there are major differences between Japanese and English vowels and stress patterns such that stressing a Japanese word correctly can sometimes throw off the rhythm of a sentence or make it sound stilted to Western ears.

For a quick reference before going into detail below, some studios are worse about this than others. Funimation's pre-2005 work stands out in this regard, as do a number of dubs from the studio formerly known as ADV Films (especially ones directed by Stephen Foster, who has said many times he cares more about an actor's performance than their pronunciation). Outside of Texas, this phenomenon is far less common, though every studio will do it to some degree.

Generally averted in Spaniard and Latin American dubs, because the pronunciation of Japanese and Spanish aren't so different as Spanish has similar stress patterns, and due the versatility of the language, many words can be written phonetically with ease. This trope, however, comes into effect with certain pronunciations such as with syllables starting with R; in Spanish, when R starts a syllable it is pronounced strongly while in Japanese it is soft. Nevertheless this may be intentional, since an extremely correct pronunciation of Japanese would sound off compared to the rest of the dub.

It is more common in works in English and French. English in particular suffers from this a lot as it is typical to transliterate rather than transcribe — that is, preserving the spelling from the language it's from rather than the pronunciation. In other foreign languages, it's much less common, because a word is typically pronounced exactly as it is written. This also happens a lot with English-language versions of anime.

(called "IPA" for short). Contrast also Funetik Aksent where (part of) a written work is written with pronunciation in mind, complete with an intended accent.

The FFVII cast argue on how various stuff in their game should be pronounced.

The FFVII cast argue on how various stuff in their game should be pronounced.