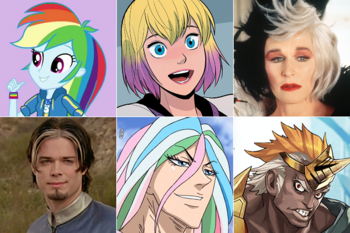 A character with hair of dramatically varying shades. Often, each individual shade would be perfectly normal (at least, by the standards of its medium).

Often the result of being Locked into Strangeness. A Super-Trope of Skunk Stripe. See also Kaleidoscope Hair, which changes color, Delinquent Hair and Anime Hair.