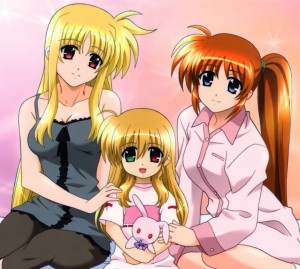 Who's your daddy, Vivio?

◊
"Ever since then, I have had two mothers. Well, this is a little bit unusual, but both of them are my precious mothers."
— Vivio, Magical Girl Lyrical Nanoha ViVid
Advertisement:

The two may be lovers, who have now become a family through adoption, a helpful donor, or through the wonders of magic or science, with added likelihood of Patchwork Kids if the latter. The two may be close siblings (but not that close) or the best of friends, with one of them wishing to help out their single parent buddy. The two may be in that very fine line between the previous two examples, giving much Ship Tease and Ho Yay to the delight of their fans.

Whatever the reason, it's all the same: A family unit that cheerfully ignores the traditional view of a family requiring a father and mother, by having two (or more!) parents, parental figures, or Parental Substitutes of the same sex. Nevertheless, one of these characters may be referred to by the opposite gender parental term; sometimes in personal amusement, sometimes out of jest, sometimes to fit with the standard family unit. In fiction, Cast Speciation will usually result in the two parents fitting into a father and a mother role anyway. Usually, the child will be the same gender as their parents.