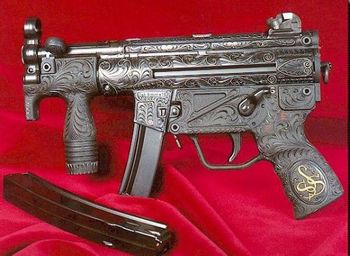 Well, the Mona Lisa is maybe nicer but can she spew 900 rounds a minute?
"God made men. Sam Colt made men equal."
— Popular saying referring to the Colt Single Action Army, or "Peacemaker"
Advertisement:

Some real-world firearms just look so cool people have to put them in things to show how awesome they are. In some cases, so much so that they appear more than in real life and / or in the wrong places, but this page is for the rest; cool guns that generally do belong where they are, are justified by internal backstory, or hidden under Hollywood embellishments. Regardless, these are the weapons that are often given that special close-up, spot on the cover, or speech extolling their virtues. Frequently, the real gun isn't quite as cool to actually use as fictional depictions would have you believe. Cool Guns may even have pride of place as a BFG or Hand Cannon, or at least be depicted as similarly awesome; this is particularly true if they have any unusual characteristics. If they do, this is a Cool Action, and will be listed with the weapon.

This trope also includes the guns so widely used that you just can't get away without having them, since these too often get special attention from the cameraman. If not, they're just regular guns; the ones that are there purely because someone needs to fire something at someone else.