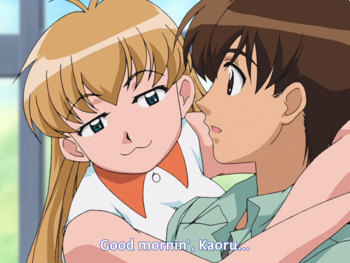 When the fiancee is away, Tina Foster will play. Rowr.
Advertisement:

The playful counterpart to the Cheshire Cat Grin, often used by The Ditz, the cute Kawaiiko or a more normal character being playful or mischievous rather than manipulative or creepy. This expression is often seen on The Gadfly, and is often a warning that they're about to pull their antics on someone. The Manga style is just more often played as cute or as crackful. They're different in that the Cat Smile rarely shows teeth (except Cute Little Fangs, if the character has them), while the Cheshire Cat Grin shows too many. Also known as "Colon Three Smile". That is, :3. There is also the "Lion Smile", also known as >:3.

The Cat Smile often overlaps with other Japanese Media Tropes and facial expressions, like Puppy-Dog Eyes for pleading. Oddly, this is not usually the default expression for Cat Girls. It's fairly common to see Eyes Always Shut with a Cat Smile for characters who are more "passively" happy or a tad ditzy/confident in their shenanigans. Half lidded eyes bring the Cat Smile its closest to the Chesire Cat Grin.

We have an emoticon for this on the TV Tropes Forum, parsed with "[[waii]]".

A subtrope of Manga Effects.

Otter With a Dark Side

Luz makes this smile, or at least an otter version of it, when she considers wearing her otter suit to Grom.

Otter With a Dark Side

Luz makes this smile, or at least an otter version of it, when she considers wearing her otter suit to Grom.