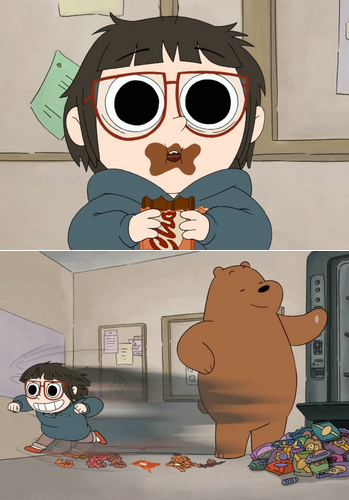 10 grams of sugar—great for reaction time, hell on your pancreas.
"Grab a soda! It'll help you see faster!"
— Tommy, Half-Life but the AI is Self-Aware
Advertisement:

Caffeine Bullet Time is when a hyperactive character of some sort, usually a comic Side Kick, ends up saving the day by increasing their speed to superhuman levels with some sort of stimulant. Coffee, sugar, drugs, whatever the source, sometimes the speed increase is so great that it seems like Time Stands Still. Since this is a comedy trope, the stimulant is usually caffeine.

In some cases, it is a generally low-Genki character who imbibes enough caffeine to send them into bullet time.

Of course, despite caffeine being a G-Rated Drug, caffeine overdose in the real world is not pretty. Wikipedia claims it can cause "dizziness, fast heartbeat, blurred vision, drowsiness, dry mouth, flushed dry skin, increased urination, loss of appetite, nausea and stomach aches". Consume "enough" at one time and it will kill you; for example, if you could drink about 154 cans of Mountain Dew in five minutes, you wouldn't be around to finish number 155. (Of course, your stomach would burst long before the caffeine did you in. However, this is a real hazard with caffeine pills; you can kill yourself by popping too many.) And, unlike more controlled stimulants, it has an obnoxiously narrow effective range, which commonly involves toeing the superthin line between still barely feeling it and side effects already present in force, even for a heavily dependent Caffeine Junkie (not an exaggeration in the least, as caffeine withdrawals have pronounced physical symptoms, and last far longer than most any "real" drug... As ubiquitous an ingredient as it is, most heavily dependent persons in modern societies just rarely experience going entirely without it long enough for full-force physical WDs to kick in, and would almost never end up in a situation where they could—much less actually would—ride them out cold turkey until they subside.)

It certainly doesn't make time appear to stand still around you in a hyper-stimulated Bullet Time (although some people have reported a short period of "everything going slowly" right before crashing). But this is Comedy Land.

Usually used in cartoons. Klatchian Coffee is likely to have the effect. Contrast Caffeine Failure.