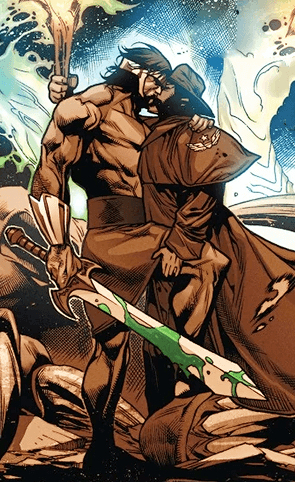 ""I met gay Batman, and he's AWESOME!"."
— Cullen Row, after interacting with Midnighter

With the fading tradition of portraying gay people as effeminate, weak or perverted, and with some people using the word "gay" as if it meant "incompetent" or "stupid", it still requires some skill to successfully make a character badass while at the same time have the character directly or indirectly engage in same-sex romance. If done well, the contrast between the negative stereotypes and the awesomeness of the character can enhance the character(s) and/or the plot.

The stereotype of gay people as effeminate-and according to them, weak because of it-is almost exclusively used toward gay men. So to counter that stereotype, badass gay male characters are often Manly Gay or Gayngster. But that is not always the case with all—enter Agent Peacock. Lesbians have the opposite problem since they often fall into the Lesbian Jock or Butch Lesbian stereotype in media. In their case, being badass isn't so much the problem as much as making the character more well-rounded.

Note that gay romance or a gay/bi identity is enough for this trope—it doesn't have to be both.

The audience can be expected to regard a romance between two individuals of different genders as simply a romance, yet regarding a romance between two individuals of the same gender as a gay romance rather than just a romance. However, unless the work is about homophobia, don't expect the characters to encounter any homophobes raining on their parade. Except maybe a stray Straw Loser or two who likely ends up getting their ass kicked by the Badass Gay character. However, don't be surprised if they get suspiciously similarly discriminated against for some unrelated and maybe unearthly reason. Author Appeal or Author Tract may be involved.

May overlap with Manly Gay, Agent Peacock, and Gayngster.