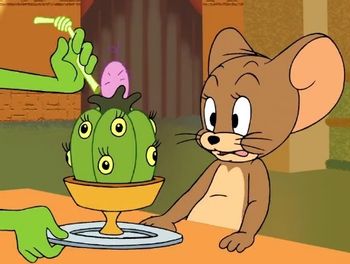 "I'd just like them to kill my food before they serve it to me. Y'know I do an honest day's work; I want already dead food. Is that too much for a fellah to ask?"
— Cale Tucker, Titan A.E.
Advertisement:

A character vocally enjoying a meal — often provided for free — has the unusual (to them) ingredients mentioned and is thoroughly disgusted. In other cases, the character momentarily pauses and then resumes eating, or through the course of the episode is obliged to eat it, then makes a habit of it. May feature the one pragmatic character (sometimes a Big Eater or even an Extreme Omnivore) who has no problem eating something they know to be unusual.

When used amongst actual aliens, another character will not understand the negative reaction and perhaps even call it hypocritical, making a comparison to the contents of a so-called "normal" meal they find disgusting (such as comparing a lobster's habits to a cockroach).

May be a subtrope of Bizarre Alien Biology. Compare with Foreign Queasine, when the strange food is from our own planet, and I Ate WHAT?!, when the stuff that went down your gullet isn't food on any planet. If the unknown dish turns out to be Homo sapiens, then it's I'm a Humanitarian instead, except for cases when man is a regular ingredient in the alien cuisine. See also No Biochemical Barriers and Palette-Swapped Alien Food.