Fanfic / The Book Of Friendship 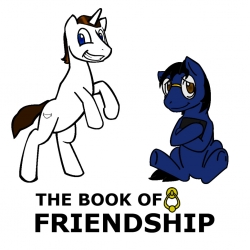 "Twilight Sparkle sent many letters to Princess Celestia detailing what she learned about the magic of friendship. These letters, along with many other writings, were collected into a book. The "Book of Friendship," as it was called, contained many teachings of love and tolerance, sharing and caring."
"And an organization based around this book sprang up, called the Fraternity of the Joyous Friends of Princess Celestia. And whenever a Brother (or Sister) comes of age, it is their task to spread the word of the magic of friendship across Equestria and beyond."
Advertisement:

The Book of Friendship is a My Little Pony: Friendship Is Magic fanfic written by Billycolt. It is ostensibly a crossover with The Book of Mormon, sharing the musical's basic plot: Brother White and Brother Scroll, two members of The Fraternity of the Joyous Friends of Princess Celestia (the organization which created the eponymous book) are sent to Earthquake Island to spread the teachings of their order. The locals, however, have problems that can't quite be solved with hugging and party games.

The similarities to the original musical end there. The rest of the fic is comprised of White and Scroll's attempts to bring the locals around to their way of thinking, a tall order when contending with raids from the Pegasi and Unicorns, and the local General Ripper, General Quake. The missionaries do manage to gather some friends, but will it be enough to change the warzone that is Earthquake Island?

Despite the darker premise, The Book of Friendship is often hilarious and genuinely heartwarming, though make no mistake: It is dark, and often gut-wrenchingly so. It currently boasts 31 chapters with no end in sight, and can be read here