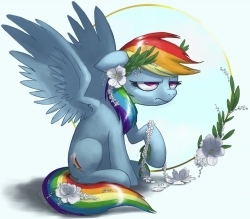 is a My Little Pony: Friendship Is Magic Shipping fic written by HoofBitingActionOverload.

Rainbow Dash knows one thing for sure, she is definitely not a barbarous, uncivilized dolt who doesn't know polite conversation from a hippopotamus's rear end. And also that she's definitely not the one who's wrong. Rarity is wrong. Rainbow Dash is absolutely, totally, a hundred percent sure of it.But then why did Rainbow just buy a wagon load of apology bouquets?