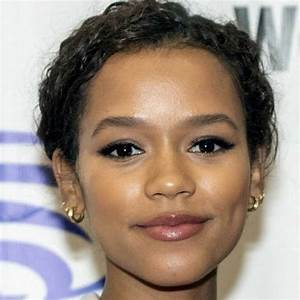 Taylor Russell McKenzie is a Canadian actress (born July 18 1994 in Vancouver, British Columbia). She was raised in Toronto, Ontario. After a number of minor roles in films and TV shows, she gained notice due to her role as Judy Robinson on Netflix's Lost In Space remake. For her work on the show, she received a Saturn Award nomination for Best Supporting Actress in Streaming Presentation (2019).
Advertisement:

She is mixed race, with a Black father and White mother. Russell has spoken of experiencing racism or colorism over her heritage and looks. She's also said she hopes that more sci fi roles will open for women of Black or mixed race descent like her, having been rejected as being "too exotic" and such for some roles before.