May contain some unmarked spoilers. 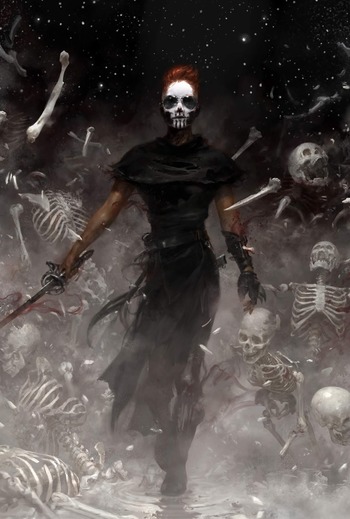 The primary protagonist and the third person narrator of Gideon the Ninth. An indentured servant of the Ninth House since she was taken in as a foundling, she grew up detested and unwanted, spending years training with her sword in order to one day leave the Ninth behind and never look back. She ends up being dragged by Harrow to the Lyctor trials on the First after the Ninth's cavalier primary fled, knowing that Harrow's success is likely the only way she'll ever escape the Ninth for good. 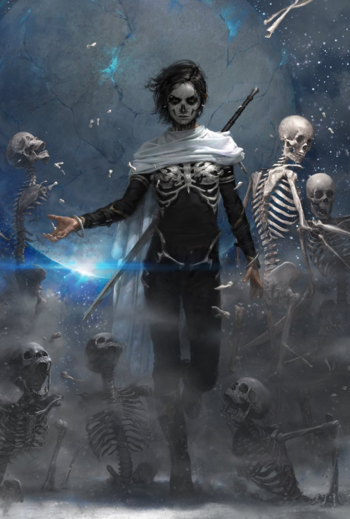 The other primary protagonist, and the POV character of Harrow the Ninth. The Reverend Daughter of Drearburh, her to the Ninth House, Harrowhark Nonagesimus is haughty, one of the most powerful necromancers of her generation, and Gideon's lifelong bully. It is only out of necessity that she conscripts Gideon as her cavalier for the Lyctor trials, because more than she hates Gideon, Harrow needs to become a Lyctor to safeguard her House and the Locked Tomb.

Keepers of the Locked Tomb, House of the Sewn Tongue, the Black Vestals
Pelleamena and Priamhark

Harrow’s parents, the Reverend Mother and Father of Drearburh.
Aiglamene

The Ninth’s captain of the (nonexistent) guard, and Gideon’s sword-master.
Crux

The marshal of the Ninth House.

Necromancer Divine, King of the Nine Renewals, our Resurrector, the Necrolord Prime
The Emperor

The supreme deity and ruler of The Empire, the Necromancer Divine, King of the Nine Renewals, our Resurrector, the Necrolord Prime.
Teacher

The leader of the three old priests at Canaan House.
Cytherea (Unmarked Spoilers)

One of the Emperor’s original Lyctors, the woman impersonating Dulcinea Septimus, and the force behind the deaths at Canaan House.

The Emperor's Strength, House of the Crimson Shield, the Centurion's House
Judith

The heir to the Second House, and ranked captain of the Cohort.
Marta

Cavalier primary to Judith, and ranked first lieutenant of the Cohort.

Mouth of the Emperor, the Procession, House of the Shining Dead
Corona

The heir to the Third House, and crown princess of Ida.
Ianthe

The heir to the Third House, and princess of Ida.
Naberius

The cavalier primary to Coronabeth and Ianthe, and prince of Ida.

The heir to the Fourth House, and baron of Tisis.
Jeannemary

The cavalier primary to Isaac, and a knight of Tisis.

Heart of the Emperor, Watchers over the River
Abigail

The heir to the Fifth House, and Lady of Koniortos Court.
Magnus

The cavalier primary to Abigail, and seneschal of Koniortos Court.

The heir to the Sixth House, and Master Warden of the Library.
Camilla

The cavalier primary to Palamedes, and Warden’s Hand of the Library.

Joy of the Emperor, the Rose Unblown
Dulcinea

The heir to the Seventh House, and duchess of Rhodes.
Protesilaus

The cavalier primary to Dulcinea, and a knight of Rhodes.

Keepers of the Tome, the Forgiving House
Silas

The heir to the Eighth House, and master templar of the White Glass.
Colum

The cavalier primary to Silas, and a templar of the White Glass.