Characters that appear in the Friday the 13th franchise. Watch out, this page and the subpages have unmarked spoilers in them. 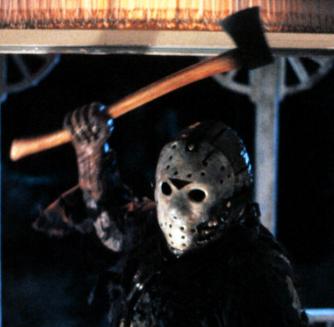 The man behind the mask himself. He was a deformed and mentally disabled kid who was thought to have been drowned in the Crystal Lake in the 50s. He re-emerged 20 years later note (either by surviving his drowning, and going into hiding for reasons unknown, or becoming an undead right there and then) after his mother died, her death triggering unrelenting hate within him. Jason is an unstoppable monster who kills anyone who makes the mistake of getting near him.

For the rebooted mayhem, check its own character page.

Step 1: Destroy Jason's corpse. Step 2: Muck it up and resurrect him instead. Step 3: Profit?
"Jason belongs in Hell. And I'm gonna see that he gets there."

Closest thing the franchise had to a recurring protagonist, Tommy was young boy who had interest in all things horror and was a good amateur FX creator. Just like any Friday the 13th survivor-to-be, he was forced to fight for his life when Jason was on yet another killing spree near his family's place. With the help of his sister he manages to bring Jason down for good, leaving him heavily traumatized in the process. He spends many years in mental institutions, and at his worst mentalstate almost becomes a replacement for Jason. Some time later he attempts to cremate Jason's body, so he can be finally released from the demons of his past. This goes spectacularly wrong and he is forced to fight Jason once more. He was the only character in the franchise to appear in more than one installment and not be killed.