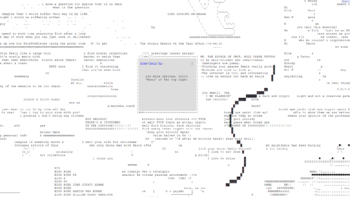 Your World Of Text

(commonly abbreviated as "YWOT") is an open-world, endless canvas of white space that anyone can write on or edit. It is entirely text-based, basically like multiplayer notepad.

People use it like a chatroom, leave random messages, write walls of text, make ASCII Art characters and have them interact and talk with each other, etc. The users can get very creative and build entire towns and cities, on which many people anonymously contribute and collaborate.

YWOT is unmoderated, and the trade-off of total anonymity and unrestricted posting is some amounts of trolling, as nothing is stopping you from impersonating other users, editing other people's messages, or them editing yours. It follows that anything you draw or write on the main page will eventually be destroyed in some form or another.

If you are a huge fan of the early internet, ASCII Art, anonymity, minimal-moderation, bunnies, and all the chaos it ensues, then this website is for you.