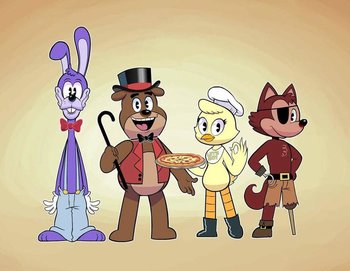 From left to right: Bonnie, Freddy, Chica, and Foxy.
An... interesting take on the premise of Five Nights at Freddy's by Hotdiggetydemon. You may find the video here.

The Fazbear crew are all just hanging out at the restaurant when they realize they're under surveillance. They grow curious as to who's watching them and head to the security room, eager to greet him with friendly smiles. They finally confront Michael Schmidt, protagonist of the first game. Bonnie tries to say hello, but Mike is terrified, and for good reason. After Freddy chops a hole in the door with an ax, he opens it and attempts to befriend him once more... only to find out he got out of dodge. And so, they split up to find them, only for them all to be killed by Mike via shovel until Freddy remained. At this point, Freddy seems to be fed up with Mike, and attempts to fight him... only for 6:00 AM to roll around and they settle down to explain the situation. Freddy doesn't seem to care that he only thought he was a sentient bear, but was really a possessed animatronic, just as long as he gets to entertain the kids. Then they step into the back room, where it's revealed that Freddy thinks Mike is a naked endoskeleton, and sees fit to put him in a Fazbear suit.

Fazbear and Friends provides examples of: