Video Game / The Machine And Her 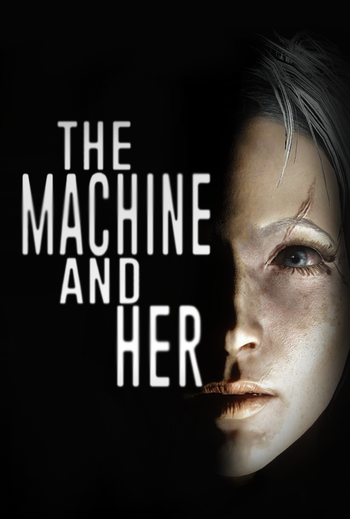 The Machine, And Her
There is always a window, and through it there is always a girl.
A.G.N.I.S. was right; I've been looking through a window, too, wondering what that white-haired fool is so afraid of...
...and what she'll do next.
— Kit
Advertisement:

The Machine, And Her is a mod for Fallout 4 that was released on September 8th, 2019 for PC and Xbox, on both the Nexus Mods platform as well as Bethesda.net.

The player character receives a strange broadcast announcing the "Grand Opening" of a decrepit subway station, and upon investigating they meet Kit, a teenage girl who has befriended A.G.N.I.S., an "Automated Transit Steward who still announces the arrival and departure of trains, seemingly unaware that the world ended over 150 years ago.

Kit tells the player that A.G.N.I.S. is experiencing pain and distress, glitching in and out of awareness, and sometimes even forgetting she and Kit have talked before. The player agrees to help repair A.G.N.I.S., and as the pair travel together across the wasteland it soon becomes apparent that there's something Kit isn't telling you about herself.

The mod received widespread acclaim; its creator was featured in an interview on Bethesda.net

alongside the project itself, which was also chosen as Nexus Mods' file of the month for September 2019.

The mod provides examples of: