“We are Man’s miracle, Crispin. Let’s hope that’s enough.”
— Horatio, contemplating the quest before him. 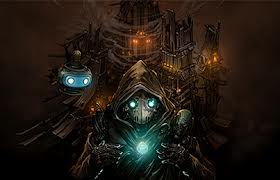 Primordia is a point-and-click Adventure Game from 2012, developed by Wormwood Studios and published by Wadjet Eye Games, notable for being heavily machine-themed throughout. Recommended for fans of nihilistic post-apocalyptic stories and Mechanical Lifeforms.

In an indefinite time in the future, the apocalypse has come and is long gone. Humanity, or as some surviving robots knew them, "Man The All-builder" is gone from the world, and all that remains are his mechanical creations, built by Him and blessed with the gifts of Memory and Logic. Two of these, Horatio NullBuilt version 5, and Crispin Horatiobuilt version 1, live in the ruins of an old flying warship, the UNNIIC, out in the dunes, a seemingly endless sea of sand and machine-junk. Before the game begins, they pass their days there gradually repairing the ship, and studying the Gospel of Man, Horatio's holy text. Their peaceful existence is disrupted when a large floating robot with big claws and lasers cuts its way into the UNNIIC, shoots Horatio, and steals the power core that the pair need in order to stay charged (read: alive).

Once Horatio is in a fit state to move again, he and Crispin begin a quest to find power. This task will not be an easy one — for robots, power is life, and the world Primordia takes place in is dying in the absence of Man.

In 2018, Wormwood Studios announced that they were working on a Spiritual Successor to Primordia, called Strangeland.

The game uses the following tropes: