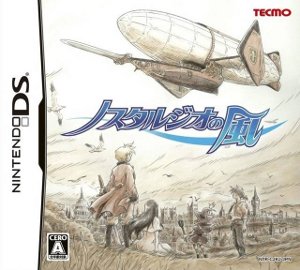 (For the arcade Rhythm Game of the same name, please see Nostalgia (BEMANI)).

Nostalgia, originally released in Japan as Nostalgio no Kaze (ノスタルジオの風, Nosutarujio no Kaze, lit. "Wind of Nostalgio"), is a role-playing video game developed by Red Entertainment and Matrix Software for the Nintendo DS handheld system. Initially released in November 2008 for Japanese audiences by Tecmo, an English version of the game was officially announced for North America by Ignition Entertainment for a October 2009 release. The game's development was headed by producer Keisuke Kikuchi, with programming and three-dimensional graphics by Matrix Software, who had previously developed Square Enix's Nintendo DS versions of Final Fantasy III and Final Fantasy IV.

Taking place in an alternate reality steampunk version of the 19th Century, the game follows Eddie, a London boy and son of a great adventurer as he and his friends travel the world in an airship in search of his missing father. The game features both standard Turn-Based Combat and aerial battles between the player's customizable airship, the Maverick, and enemy airships. The player's party, consisting of Eddie, the Street Urchin Pad, a witch named Melody and the mysterious Fiona travel to such places as New York City, Cairo, Tokyo, Northern Europe and South America.

The game follows The Grand List of Console Role Playing Game Clichés to a tee, most likely on purpose in order to invoke nostalgia of old school NES and SNES generation RPGs. Whether it's successful or not is a subject of debate. Though the narrative is certainly nothing new, the gameplay is simple and fun, and there are plenty of sidequests and other optional content to keep players occupied.

NOT to be confused with Nostalgia Filter or The Nostalgia Critic, or the Konami Rhythm Game of the same title.