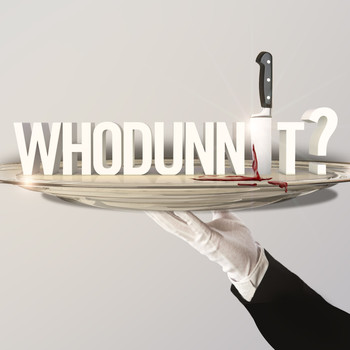 Are you the Killer's most worthy adversary?
Advertisement:

Made by the creator of CSI, Whodunnit? is a murder mystery Reality Show that premiered June 23, 2013 on ABC and ended on August 18.

Thirteen contestants are invited to a cursed mansion called Rue Manor. Each week, at least one of them is "killed," and the others must solve the mystery while trying to figure out who among them is the Killer. After collecting evidence, the contestants stand one at a time in the library and reconstruct the murder as best they can. The person whose theory is farthest from the truth becomes the next victim.

The evidence-collection phase of each episode has two stages. In the first stage, the contestants gather clues by examining the room where the body was found, the body itself in the morgue, or a relevant third location (usually somewhere the victim had been shortly before the murder) — but each contestant may visit only one of the three locations.

The second stage is a treasure hunt: the contestants are given a clue which leads to another clue and so on; the first person to follow the chain of clues to its end finds the murder weapon and gains an insight into the murder method — and ends the hunt before anyone else gets to complete it. Thus, it is not possible for any one person to find all the available clues, and strategies for gaining truthful information from other contestants can be key to a successful solution. The last contestant alive gets to unmask the Killer and wins $250,000.