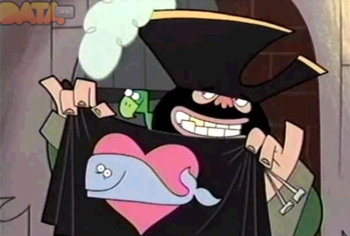 On the satellite, Otto and Larry are admiring the view of space when Otto notices a cloud of trash floating nearby. The cloud appears to be the work of Tuddrussel, who threw all of the trash out through the airlock instead of recycling or using the particle incinerator. Larry starts scolding Tuddrussel about not caring for the environment when the History Instability Alarm goes off. The team sees that their mission involves Edward Teach, more commonly known as Blackbeard. The team heads out and appears on a ship where pirates are arguing.

The pirates are ready to attack Time Squad, but Tuddrussel steps forward and explains their purpose. When Tuddrussel pushes aside one of the pirates, they all just get angrier, and as they are deciding what to do with Time Squad, Blackbeard arrives and says that they need Time Squad as new recruits to fight with them. Tuddrussel is excited, but Blackbeard says that his crew is not focused on pirating. His crew is embarrassed as he explains that he fights to save whales. Blackbeard thinks whales are cute, especially when they sing. Tuddrussel is suddenly unenthused about joining Blackbeard, but is forced to do so when Blackbeard threatens to roast him. Later, the team receives some pirate gear, which includes weapons, outfits, and coloring books of endangered animals.

At night, below deck, Blackbeard's crew members explain their embarrassment to Time Squad, saying other pirates call them yellow-bellied sissies. Tuddrussel suggests mutiny, and when the crew is too scared, he offers to face Blackbeard himself. On the deck, Tuddrussel calls Blackbeard, who comes from his room to show off a new flag he made sporting a whale on a heart. Tuddrussel calls the flag pathetic and then angers Blackbeard by throwing a barrel of recyclables overboard. Blackbeard attacks Tuddrussel, and the two fight until Tuddrussel accidentally pulls the sail down, hitting his head.

Before Blackbeard can attack again, Tuddrussel tells him that his men are ashamed of him, which the crew admits to. Suddenly, Otto has an idea of how Blackbeard can protect the environment while pirating.

Later, Blackbeard's crew is seen looting another ship, and a woman tells the pirates that they are terrible. One of the pirates then informs her that 10% of the loot goes to protect reefs, making her soften and wish them good luck. Time Squad then says goodbye to Blackbeard.