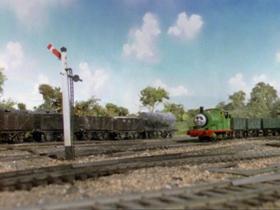 Percy works in the yard, collecting coaches and trucks that the bigger engines need for their trains. Although he works hard, he can also be very cheeky. One day, he wakes Gordon up by telling him is train is ready. Gordon jumps, thinking he's running late, only for Percy to reveal a line of dirty trucks. Gordon is angry and tries to think of a way to pay Percy out.

A few days later, Percy is showing off to Gordon and James as the Fat Controller has asked him to take trucks to Thomas' junction. He's boasting that he was chosen as he's a really useful engine, but James thinks he probably just wants him out of the way. Gordon and James then put form a plan and put it into action. They claim they were talking about being careful with the signals at the junction, especially "backing signals". Percy, keen to show off, claims that he knows all about signals and leaves, but worries as he has never seen or heard of a backing signal before.

Soon Percy arrives at a signal set to danger. However, when its arm moves up instead of down, Percy, having never seen anything like it before, guesses that it's a backing signal and begins reversing. Percy's driver is shocked and quickly stops him, but Percy insists that it's a backing signal and tells his driver about what Gordon and James had said. The driver laughs, then tells him the truth. Percy is eager to leave before he is seen, but is too late, Gordon goes past and sees that Percy fell for the trick. Percy quickly and quietly finishes his work.

That night in the sheds Gordon and James talk about signals; while they think it's funny, Percy thinks they're being very silly.