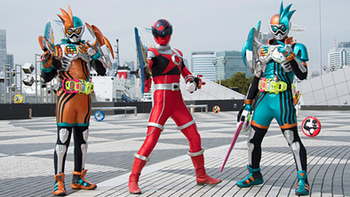 The fierce battle between Ex-Aid and Genm has now come to an end. Meanwhile, a woman who was injured, Sora, is brought to Emu and Hiiro. Sora's band members argue, when suddenly all 3 of them are taken over by Bugsters! And on top of that, when Emu tries facing them alone, a young man appears yelling, "Talk about lucky!".