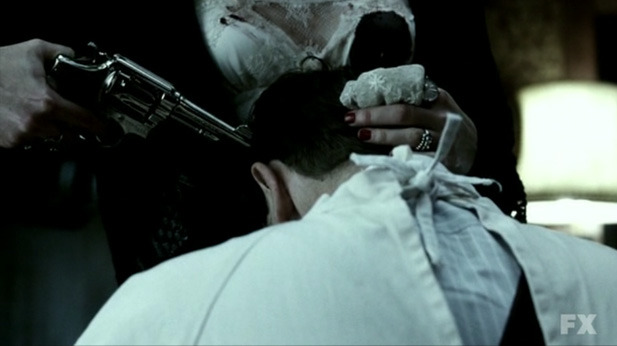 Constance and Larry attempt to keep Moira from finding a buyer for the Murder House.

1994 - The phone is off the hook and Constance is talking to Larry. The people on the other end of the phone are going to take away Constance's disabled child, Beau and place him in an institution. Constance pleads with Larry to do as they had discussed. Beau is in the attic playing ball with Larry. Larry puts him to bed and smothers him with a pillow.

2011 - Ben and Vivien wait in the doctor's office for the test results which shows that the baby is perfectly normal and healthy. It also shows that Vivien is expecting twins.

Later on at a scheduled house meeting, Marcy the realtor is showing the house to Joe Escandarian. He plans on removing the gazebo and putting a swimming pool in its place at Moira's bidding. He wants to know what is wrong with the house which Marcy glosses over the previous deaths. As Moira (appearing as her young self to Joe) shows him around, Marcy and Vivien fight about revealing too much of the house's history.Soon after Joe leaves, Larry turns up for the open house viewing. Marcy tries to turn him away. It's unclear whether his appearance and behaviour frightens her or she knows who he is. Larry refuses to leave, saying he's an interested buyer. Marcy pulls a gun on him, threatening to shoot if he doesn't leave. She 'rationalises' her threat with a bizarre racist remark, making no sense as Larry is white. He in turn threatens a lawsuit. Vivien breaks up the stand-off by offering to show Larry around. He seems particularly taken with the fireplace.

Violet is back to cutting herself before Tate intervenes, asking her to stop. He licks off the blood from her wrists and makes her agree to stop. He then asks her if she believes in ghosts and the afterlife. He tells her that if she were to die, he believes she'd move on to a better place. Violet asks why he doesn't believe in an afterlife. Tate replies that his better place is with her.

At dinner, Ben and Vivien confront Violet about her depression. She doesn't leave the house and has stopped eating. They also confirm that they're definitely selling the house, causing Violet to leave. Vivien tells Ben about the prospective buyers, including Larry. She also states that herself and Marcy will be taking the Murder House Tour. Vivien and Ben argue about giving the full disclosure of the house's history to possible buyers.

Joe Escandarian returns, saying he'd had a hard time keeping the house off his mind. Moira continues the tour, making it as sexually laden as possible. She leads him to Violet's room, telling him that if she had it her way, she'd paint it red and have a sex swing installed. She then gives him a blowjob, stating that Persian men are said to be well-endowed. He corrects her by saying he's Armenian. Afterwards, they return to the hallway and bump into Ben who's collecting his clothes. Ben tries to give Joe a quick pitch but Joe says he isn't interested. He plans to bulldoze the house and convert the land into condos.

Larry comes back with groceries to a waiting Ben. Ben confronts him about returning to the house and Larry says that he needs it to be happy again with 'her'.

1994 - Larry tells his wife, Lorraine that he's fallen in love with Constance. He tells her that to avoid problems, she and the children should move to Ohio where he'd send them money and occasionally visit. The breaking point comes when Larry tells her of his intentions to move Constance into the house. Upset, Lorraine leaves the table. When Larry pursues her, he finds the room on fire with presumably his wife and children inside.

2011 - Ben tells Larry of Joe's plans to demolish the house. Larry is not pleased.

The Eternal Darkness Tour covers the story of other murders before arriving at the Murder House. Stan, the tour guide tells Vivien that he remembers her and that she's the current owner.

1926 - Charles Montgomery tells his wife, Nora that their son, Thaddeus is waiting in the nursery upstairs for her. Nora cautiously goes upstairs to a draped crib but Thaddeus is across the room. Disturbed, Nora goes back down to ask about their child's resurrection. Nora then reveals the baby is now bloodthirsty as she tried to breastfeed only to be clawed and bitten. She tells Charles she tried to stab it to death with a letter opener which unsettles him. To calm him down, Nora tells him that she's proud of what he's achieved which brings tears of joy to his eyes. As Charles falls to his knees and hugs Nora, she takes a revolver and shoots him in the head. She shoots herself after.

2011 - Vivien goes back to the doctor for a check-up. She states that the vitamins she's taking aren't helping and that she feels sick every time she leaves the house. He suggests that it's a sign that she shouldn't be overexerting herself. Vivien asks for extra tests to be done.

Constance is in the basement of the house, talking to Larry who's in the shadows. She asks to see the burnt half of his face. Larry had sent her red roses which she claimed to be a cliche. Constance tells him she's disgusted by him as he blames her for what happened to him. Larry then fills her in on Joe's plans for the house before she leaves.

Violet goes to the attic where a red ball rolls across the floor towards her. Beau scares her but Tate tells him to go away. Tate tells her that she's seeing ghosts now because she's more evolved and that if they scare her, she can just tell them to go away. He shows her an old box of photos, including some of the Montgomerys. Maria's ghosts appears but Violet successfully tells her to go away.

Constance visits Joe and attempts to steal some crystals from him but is caught. He thinks she wants him to buy her house as well to enlarge the plot size. Over a drink, they discuss real estate. She tells him that he should show respect for the house. Joe replies that if she wants it so badly, she should buy it before asking her to leave.

Tate is in session with Ben. He tells him that he doesn't fantasise anymore and that he feels much better. Ben wants Tate to tell him if there's a problem and especially if Violet is feeling suicidal. Tate envies Ben as a father but does not tell him about Violet's recent suicide attempt.

Constance and Moira exchange insults. Moira is happy that Constance is miserable and is for once unaware of the reason. Constance leaves to look for Tate. When she finds him, he's angry with her. He leaves and she goes to the attic for find Beau. She has come to say goodbye and that everything is over. On her way out, Constance tells Moira that Joe is planning to going to seal Moira's tomb, not unearth her remains. They agree to unite and fix the problem.

Moira invites Joe over for another seduction, leading him into the basement. She goes down on him again but bites off his penis whilst Larry suffocates him with a plastic bag from behind. Moira has earned some respect from Constance who bids Larry to get Joe off the property before he dies properly.

Vivien and Violet talk about leaving the house, thinking the property deal is still on. Violet asks Vivien how she knew she was in love with Ben. Violet shows her pictures of the Montgomery family. Vivien realises that she's encountered Nora before.