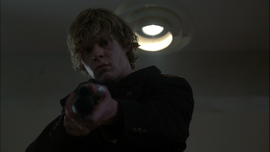 1994 - A shooter has opened fire at Westfield High School. Students hide in the library and try to barricade the door. Tate manages to get inside and begins executing them one by one. The Los Angeles SWAT team arrive at his home and find him waiting in his bedroom. They train their scopes on him and he stands, miming a gun firing at his head.

2011 - Violet searches for information on the Westfield High massacre. She finds the list of victims and Tate's picture as the shooter. She frantically searches for her mother but finds Constance waiting in the kitchen. She's deduced that Violet's found out the truth regarding Tate and introduces her to a medium named Billie Dean Howard. Billie Dean is there to help Tate move on as he isn't aware he's dead. Constance explains that this is why she wanted Tate to see Ben therapeutically. Constance and Billie Dean want Violet's help to get Tate to move on. Violet is skeptical of both ghosts and Billie Dean's abilities so in order to convince her, Billie Dean recounts a recollection from Mary, Violet's dead grandmother. On Mary's deathbed, she told Violet that her family do not understand her.

Vivien rubs her pregnant belly as a cello plays. She wakes up immediately and presses the panic button on her security system. Luke, the security officer, checks out the house and declares it safe. He's understanding of Vivien's insecurity due to Ben's infidelity as his own wife left him for another woman. Luke mentions that Hayden must have hopped out the car at a stop sign before he leaves. Ben has now moved out but still uses the office for his sessions.

Violet has begun self-harming again. She cuts at her wrists using Ben's razorblades. She imagines cutting her throat in order to kill herself. In that moment, she sees Tate who asks her whether she's scared now. He disappears.

Ben's new patient, Derrick is terrified of urban legends particularly the Piggy Man; a pig butcher from Chicago in 1893, who wore a pig mask when killing. The pigs tore him apart after an accident and his former customers were dismembered. He can be conjured by saying, 'Here piggy pig pig' in a mirror.

Violet enters Ben's office, distraught. She says that the darkness is eating her up. Ben presumes she is talking about her parent's break up. In reality, Violet is struggling to cope with the truth about Tate, his death and the reality of the ghosts. As he comforts her, Ben accidentally calls Violet by Vivien's name.

Vivien is looking for Nurse Angie, the same nurse who fainted at Vivien's ultrasound scan. She learns that she has quit. Moira meanwhile is cleaning around her. Constance enters, bearing sweetbreads for Vivien to eat during her pregnancy. The sweetbreads are raw organs. As Moira prepares the food, she tells Vivien that Ben will cheat again.

Ben works with Derrick again, using successive approximation in the Harmon's bathroom. Derrick tries the 'pig call' and a bloody Gladys appears in the tub.

Vivien has an amniocentesis, a test used to see if a baby has any foetal deformities or problems.

Violet sees Leah at a skate park. Leah tells her that the Devil is real and talks to her about the Book of Revelation and the Red Dragon. She shows Violet that her hair has turned grey from being traumatised. Neither of them are sleeping so Leah offers Violet some of her sleeping pills.Later on, Violet visits the library and sees a plaque dedicated to the massacre victims. A teacher in a powered wheelchair calls her a sicko. Violet explains her connection to the victims and he agrees to discuss the incident with her. She wants to know why Tate did it and he replies saying that Tate just wasn't a good person.

Vivien breaks bad news to Moira. Moira thinks it's about the baby but is instead fired by Vivien, who explains it's due to not having enough money to pay her. Moira says she will continue working for them for free. Constance drops in, bringing more food; this time a raw brain. Vivien cautiously digs in and surprises herself by how much she enjoys it.

Violet comes home and sees a shadow of Tate move. She follows him to the basement where she encounters the ghosts of Gladys, Troy and Bryan (the red head twins), two of the home invaders and Charles Montgomery. She runs upstairs to her room to find Tate has put her ipod on and written 'I love you' on the chalkboard. Terrified and confused by her feelings, Violet decides to overdose on her sleeping pills. Tate finds her and drags her to the bath, crying for her to wake up. He makes her throw up by sticking his fingers down her throat.

Ben is in session with Derrick. Derrick tells him that he's found a woman he wants to be with. Ben tells him that he needs to confront his fears in order for him to form a new relationship.

Vivien tracks down Nurse Angie in a church. Angie tells her that she's converted to Catholicism after claiming she saw the Antichrist in Vivien's womb. Vivien leaves, believing the woman to be insane.

Derricks calls the Piggy Man in front of the mirror to confront his fears, just like Ben told him. Ironically for him, an overweight robber is hiding behind the shower curtain; thinking that Derrick was aware of his presence and had insulted him. He shoots Derrick in the head.

Back in 1994, Constance is at the house confronting Tate after the shooting. She wants to talk to him but he goes for a gun hidden under his pillow. He's riddled by bullets from the SWAT team in response. An officer asks the dying Tate why he did it but Tate dies before saying why.

Violet has borrowed a book about birds from the library as this was one that Tate had previously had. The teacher in the wheelchair explained that Tate read a lot about birds. She finds Tate's name on the register. Tate appears and asks her if she'll tell her parents about the overdose. He also asks her why she's so distant from him now and wants to know if she wants him to leave her alone. He admits he loves her but will stand by her decision. She calls him to her and they both lie on the same bed Tate died on , exhausted.