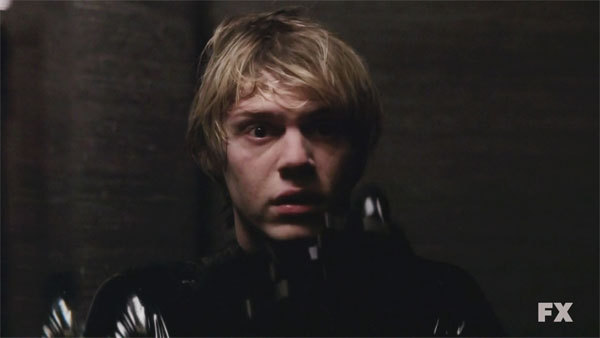 The Rubber Man is finally unmasked.

2011 (Six Months Previous) - As the Harmons move in, Nora is distraught that someone has changed her house. She collapses in a chair and starts to weep for her baby as a man comforts her. The mystery man removes the rubber suit that Ben threw away. The door to Ben and Vivien's bedroom opens and Vivien is applying lotion to her legs. The scene proceeds as Rubber Man and Vivien have sex. Afterwards, Ben passes the Rubber Man on the stairs and both Vivien and Ben tell each other they love each other in a daze. In the bathroom, the man in the suit takes it off, revealing it to be Tate. His motivation for sleeping with Vivien was to make a baby for Nora.

2011 (Present Day) - Marcy, Vivien and Moira are talking in the kitchen. Vivien expresses that she isn't crazy and definitely saw Nora in the kitchen before. The other two women try to disuade her from the idea and explain it rationally but Vivien believes someone is trying to make her feel crazy. Marcy tells Vivien that her cousin became paranoid when she was pregnant. Marcy leaves to speak with Joe.

2011 - Hayden confronts Nora about her crying, saying it's annoying her. She then begins comforting her. She explains that there are other ghosts residing in the house. Hayden tells Nora of her anger. She also tells Nora that she's dead, showing her the bullet in the back of her head. Hayden and Nora relate to each other about their lost children with Hayden suggesting they take Vivien's as she 'can't raise them in the loony bin'.

2010 (Halloween) - Tate puts on the rubber suit before drowning Chad in the apple bobbing bucket. Patrick comes in wearing a cowboy suit, discovering his dead lover and Tate in the rubber suit. Tate/Rubber Man proceeds to grab Patrick, hurling him against the table and bludgeoning him before grabbing the fireplace poker and beating him with it. He then proceeds to shove the hooked end up Patrick's backside, murdering him. Nora is in the basement, examining the gunshot wound on Patrick's head. Tate comes up behind her, comforting her and telling her he will get her a baby.

2011 (Present Day) - Violet confronts her fears and visits Beau in the attic. Ben finds her upstairs and ask her who she's talking to. They go to Ben's office where they have a father/daughter talk. Ben tells Violet that he's been informed she hasn't been in school for two weeks and asks her why she's been skipping classes. Violet argues that she's bullied and school is boring and points out that Vivien's been acting strange too. Ben tries to psychoanalyse her which annoys Violet. She snaps at him, telling him it's his fault.

Moira and Vivien are talking with Vivien trying to explain why all the weird stuff is happening. Moira pours her tea and comforts her. She tells her about a book she read all about a woman who was locked in an attic with wallpaper covered in women, just because she had a slight mental instability. Being trapped there day after day caused the woman to hallucinate and talk to the women in the wallpaper and scratch it off. When her husband came back, he finds her talking to wallpaper. Moira continues to tell Vivien that men will always find an excuse to lock women up. She assures Vivien that she's not crazy, the things that are happening are real and the house is possessed. She then tells her that she should leave.

Vivien wakes Violet, telling her they're leaving the house. As they leave, Violet catches Tate watching from the house; begging her not to leave just with his eyes. She gets in the car and sees the home invaders ghosts in the back seat, scaring her.

Ben confronts Vivien about trying to Violet away from her. Vivien tells him the home invaders were in the car but he doesn't believe her, saying the police found no evidence. Vivien reassures him that Violet saw them too.

Violet and Tate have sex, with him taking her virginity. Violet describes her first experience as intense which Tate agres with. Tate reassures her that he'll always be with her. She asks if the others will be too. He replies that they can't hurt her. Violet asks if the home invaders are dead too. Tate says that she can't tell anyone as they won't believe her. Ben calls her downstairs.

Ben and Vivien continue arguing about leaving the house as well as Hayden and Vivien's mental health. Vivien throws the rubber mask at Ben but he denies ever wearing it. Violet lies about what she said the previous night, claiming she only said it to keep her mother happy.

Hayden tells Tate that Vivien has booked plane tickets and that he knows what he has to do. Tate acknowledges that she's right so she tries to seduce him. He rejects her advances, saying he's aware what needs to be done but that he's in love.

Vivien confronts Marcy about Joe but as they're arguing, Vivien fakes sickness with Marcy rushing to get her some water. Vivien steals Marcy's gun from her purse before telling her she's going to lie down.

Vivien goes to bed and sees the Rubber Man in the dark. The Rubber Man passes the screen and grabs Vivien as she goes to investigate. He pushes her on the bed. Vivien grabs Marcy's gun and shoots. She doesn't realise that it's Ben.

Luke arrives at the house and confronts Ben about Vivien's 'psychotic turn', believing Ben has an ulterior motive. Ben angrily asks him to leave.Vivien is suffering hallucinations of the Rubber Man and Hayden trying to take her babies. Luke and Ben hold her down to try and calm her as she insists her rapist and Hayden are still in the house. Violet lets in two police officers who take Vivien to a psych ward.Ben leaves to his apartment, leaving Tate and Violet alone in the house. Tate assures Violet that he'll be there for her.

2010 (Halloween) - Tate is dragging bodies down to the basement when Moira interrupts him. Tate drags the bodies of the men into the basement and on Moira's advice, stages it to look like a murder/suicide. Chad is still alive and reaches for Patrick. Tate shoots Patrick several times before making Chad hold the gun and shoots him in the head.