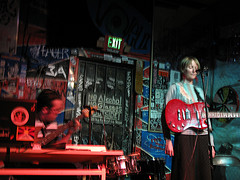 Jess Gulbranson(seated) and Shreya Bollock..
"YOU DO NOT FUCK WITH THIS HEART. WE MAKE OUR OWN LIGHT DOWN HERE."

Coeur Machant is an American psychedelic band with a relatively rare modus operandi: the two members live in Portland, OR and Olympia, WA respectively, and record all their music remotely, only meeting for the first time before their first gig. Jess Gulbranson came from bands such as Joys of Oil and Numinous Knot, while Shreya Bollock was an accomplished folk singer.

From the band's bio, on the origin of their name:

"The name of the band is perhaps the most persistent puzzle for many. It is taken from an Art Nouveau poster series that Gulbranson started in 2007, the phrases being taken from a book on lexicology, and actually misspelled. As found in the book, the French means “biting heart.” The original phrase coeur mechant has a curious history, according to the Maven’s WOTD on the Random House web site:

“If you look up curmudgeon in Samuel Johnson’s 1755 Dictionary of the English Language, you will find the following in parentheses before the definition: “It is a vitious manner of pronouncing coeur mechant, Fr. an unknown correspondent.” Coeur means ‘heart’, and mechant means ‘bad’. Dr. Johnson had apparently lost track of who had given him this etymology, and the “Fr.” stands for ‘from’. However, a man named John Ash published a New and Complete Dictionary of the English Language in 1775 in which he took Dr. Johnson’s “Fr.” to mean ‘French’ and, knowing no French, provided the etymology “from Fr. coeur ‘unknown’, mechant ‘correspondent’.” An embarrassing lexicographical moment.”"