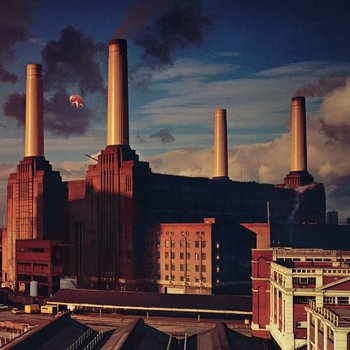 Who was dragged down by the stone? * The now decommissioned Battersea power station displayed in the cover art is now a point of peregrination for Pink Floyd fans.

Animals is the tenth studio album by Pink Floyd, released in 1977. Inspired by the recent rise of Punk Rock and its consequent ousting of "traditional" Progressive Rock as a mainstream force, it marks a shift to a harder, more arena-friendly sound and more overtly political lyricism, both of which would grow in magnitude during the remainder of Waters' tenure with the band. Specifically, Animals is a Concept Album inspired by Animal Farm, with a loose narrative acting as an allegory for bassist Roger Waters' discontent with the state of British society and politics at the time, hypothesising a setting composed of 3 types of people: greedy businessmen (Dogs), dogmatic authority figures (Pigs) and those with a groupthink mentality (Sheep). This album marks the point where Waters started to fully take over the band, writing or co-writing all the songs and singing lead vocals on all the songs (except for "Dogs", where he shares lead vocals and a writing credit with David Gilmour).

Despite this, Richard Wright was able to shine brightly on this album despite not contributing any compositions, and it is his penultimate album with the band before he was fired during the making of The Wall; consequently, it is the last Pink Floyd album to be released while he was still a member of the band. He would come back to play on a few tracks on 1987's A Momentary Lapse of Reason and was fully reinstated as a member of Floyd when work began on The Division Bell in 1993.

Animals was not supported by any traditional singles, owing to the fact that all the songs on it are either much too short or much too long to be conceivably released on a 7". That said, it managed to be yet another success for Pink Floyd, peaking at No. 2 on the UK Albums Chart and No. 3 on the Billboard 200, and topping the charts in the Netherlands, Germany, New Zealand, and Spain. The album was also certified quadruple-platinum in the US, double-platinum in Canada, platinum in France, Germany, and Italy, and gold in the UK and Austria. While the album was polarizing among critics upon release as usual, it was an instant hit with fans, and its acclaim exponentially increased as time went on. Fans and critics now regard it as one of Pink Floyd's finest albums, one of the best progressive rock albums ever made, and one of the greatest albums of the 1970's; as of 2020, it sits at No. 1659 on Acclaimed Music's dynamic list of the most critically lauded albums. The fan favorite song on Animals seems to be "Dogs", with "Pigs (Three Different Ones)" being a close second.

Preceded by Wish You Were Here. Proceeded by The Wall.

I've looked over Jordan, and I have troped: