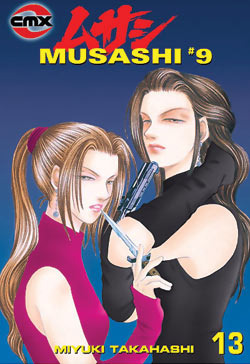 Musashi #9 (1996-2006) is a Japanese manga series, written by Miyuki Takahashi. Published originally in Japan, under the title "Kyūbanme no Musashi", it falls into the Shōjo category. It follows the adventures of a 16-year-old secret agent, the 'Musashi' of the title. She works for an organization called Ultimate Blue. There were 17 translated collections made in English before the imprint was shut down. In 'Ultimate Blue', each agent is given a codename and number. The number is actually far more important than the name. The lower the number, the higher position. The 'ones', as they are called, agents #1 through #9, run the entire organization. And, as was probably pretty obvious, the agent followed by the series is #9.