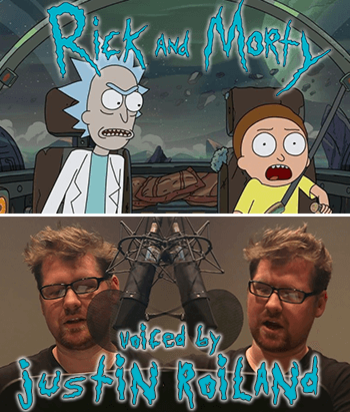 Professional voice actors pride themselves on range. So, hiring a few good voice actors means you can take care of many characters with a small cast (especially if one or two actors are a Woman/Man of a Thousand Voices).

Oftentimes, this results in funny situations, like two characters played by the same person having intense conversations and heated arguments with each other. The talent is in making sure the audience doesn't know it. If jokes are made about this, it's Actress/Actor Allusion.

Sometimes this can happen in real life for technical or legal reasons where a person is required in one capacity to write themselves (in another capacity) a letter. For example, in most US states, for small corporations, a corporate officer can file an authorization to the board of directors to waive the corporation carrying workers' compensation insurance on that officer. Now, in the case of a corporation with a single owner (who therefore is both Chairman of the Board of Directors and President), the President of the corporation (who is the only officer) has to write a letter to himself, as Chairman of the Board, informing himself that he (as President) is waiving the Workers' Compensation coverage on himself (the letter being sent to the Workers' Compensation Board).

In voice acting, the process is fairly simple, with the actor just doing a different take (although some good voice actors can do it in real-time). The actor's vocal range is the only thing that might betray commonality.

This is sometimes actually invoked on purpose, as it can make you think, "Ohey, they're a clone? Why didn't I realize that before?".

In Live-Action this has historically been difficult, requiring split screen or otherwise splitting the image and requiring perfect synchronization between the different takes. Normally, the camera was stationary for this, but Back to the Future Part II pioneered a motion controlled camera that allows for complex panning shots that have the same actor in multiple roles. More modern works are able to do it a bit more easily due to advances in computer editing.

See also Solo Duet, where a singer does two different voices to make it sound like a duet, usually Played for Laughs.

Not to be confused with Informing the Fourth Wall, Sounding It Out, Thinking Out Loud or Talking to Themself. Compare Holding Both Sides of the Conversation, which is an in-universe example of this trope, where a character is pretending to hold a conversation with another non-present (or non-existent) character, in order to maintain some kind of charade. Contrast Two Voices, One Character.

Alternative Title(s): Talking To Yourself, Talking To Herself, Voice Acting For Two