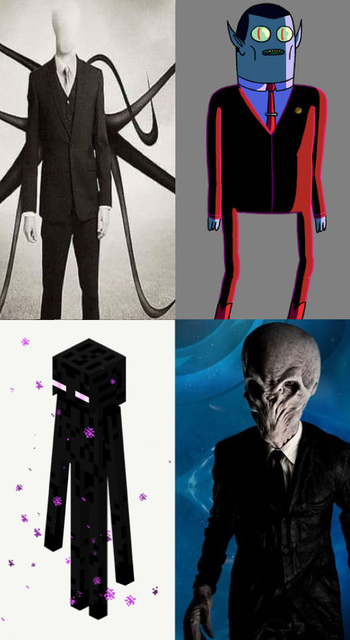 From left to right, top to bottom: Slendy himself, Hunson Abadeer, an Enderman, and a Silent.
Advertisement:

Slender Man started as a strange little experiment in urban legends on an online forum and a handful of Youtube channels — sort of a modern day, internet-born Bloody Mary or Hook-Handed Man. Considering the memetic, viral way Slendy crept into popular consciousness, it shouldn't be surprising that he's spawned numerous Expies, often attempts to duplicate the formula or just outright parodies.

A Slender Man Stand-In usually has at least a few of the following characteristics:

A subtrope of Fountain of Expies.