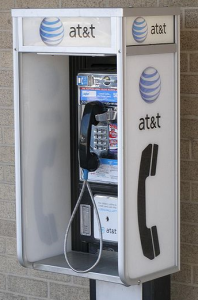 It's for you!
"I put a slug into the pay phone—another slug answered."
— Strega by Andrew Vachss
Advertisement:

There was a time period where, in civilized countries everywhere, it was both possible and occasionally necessary to use a "public" telephone that required the insertion of change to make a call. Even for some time after the invention of mobile phones, very few people had (or could afford) one.note Particularly in poor or remote areas, people considered themselves lucky to have a home phone, never mind a cell phone! Those days, which spawned countless tropes, are essentially gone. Cell phones are now so cheap almost anyone can afford them, so the only reason to use a pay phone is when you run out of battery or minutes (or you don't want the call to show up on your phone), or the person you're trying to reach is not answering calls from your phone or has blocked your number, or your phone has been lost, broken, or stolen. Thus, the only places that have pay phones are ones with extremely high traffic, usually transient, where people either don't have a cell phone or don't want to use it, such as a bus depot, train station, truck stop, the occasional Greasy Spoon, or airport, or places where cellphones are forbidden, such as hospitals or prisons. And even if you do find a pay phone out in the wild somewhere, there's no guarantee that it works; increasing numbers of them are being decomissioned altogether, because of the prevalence of cell phones.

A Pay Phone was often found in a phone booth. These are a lot less common these days.