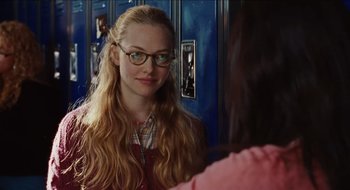 "Don't let her complete and total hotness fool you! She would much rather be reading than go to some party!"
— The Agony Booth: High School Musical

Take your average attractive actor or actress and stick on Nerd Glasses, a lab coat, and some Messy Hair and clothes, to make them Hollywood Homely. Their character is probably also Hollywood Dateless and supposedly prone to social ineptitude that may actually only be an Informed Flaw. They may even shoot straight into Hot Scientist or Hot Librarian (or even Omnidisciplinary Scientist) territory without help from their smarts to pull it off. They may also be involved in an Ugly Duckling Beautiful All Along story if they do get paired off with someone. And there you have them; the Hollywood Nerd.

The Hollywood Nerd will have an interest in some “geeky” subject such as comic books, science fiction, or baseball, helping identify them as a loser, especially if they still live in their parent's basement. However, this will rarely be shown with sufficient detail to make it realistic to someone actually in the know, or it will be a mismatch of fandoms. In Hollywood, there is a very set list of things you can be a “geek” about.

See also Geek, Nerd. Compare Hollywood Homely, Geek Physiques, Cool Loser, Give Geeks a Chance. The Meganekko is a common anime equivalent. See also Nerds Are Sexy, in which the nerdiness is what makes someone attractive, and Endearingly Dorky (or the YMMV Adorkable, which is when the nerdiness makes someone cute.)