Flower in Her Hair 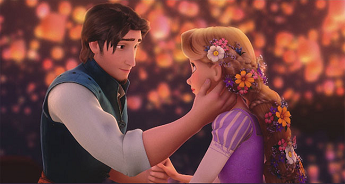 One has to hand it to Flynn; lord knows how many hours he spent decorating Rapunzel's hair like that.
Thor: It's not my fault! She never told me she was a fertility goddess!
Loki: She has flowers in her hair and bluebirds singing around her head. Who did you think she was, the bringer of pestilence?
— The Order of the Stick

Flowers have long been a symbol of femininity, and therefore young women (and those who are young at heart) sometimes wear them in their hair.

These can take the form of a daisy chain headband or a single flower (or bunch) placed in the hair. The flowers can be real or artificial.

A Sub-Trope of Hair Decorations.

Alternative Title(s): Flowers In Her Hair