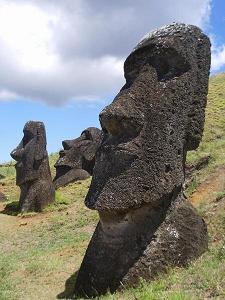 "...catch a seagull in the sky, if he hollers, let him fly, my mother said to pick the very best head and you are... IT!"
Advertisement:

Moai (literally "statue[s]" in the Rapa Nui language) are famous stone statues found on Easter Island that typically depict a human's head and body and are sometimes seen with a hat called a pukao. For whatever reason, they wind up cropping up in fiction quite a bit. Very frequently their existence or history is treated as a mystery, possibly to be "explained" by some element of the plot, even though in Real Life their significance and means of construction are known and uncontroversial. Many works also tend to describe the moai as ancient, even though they were really built between the 13th and 15th century CE, which makes sense considering that the people who built them, the Rapa Nui, started inhabiting Easter Island less than three centuries earlier.

More recently, the island is held up as a Green Aesop, since archeological research suggests there was a thriving population, but it was apparently so obsessed with creating the statues that they overtaxed the island's resources and made it uninhabitable with an environmental collapse. Even more recently, this explanation has fallen out of favor due to new evidence suggesting that transporting the moai was not done by rolling them on logs, and the extinction of Easter Island's trees was caused by the accidental introduction of rats that ate their nuts.

More often than not the fictional equivalent is typically just the extremely large moai head and neck, as opposed to a full-body moai; the most widely-known real-life moai are those of Rano Raraku, which are full-bodied statues buried up to their shoulders or necks in the ground. These moai were the most famous (and impressive) largely because they were the only statues that the Easter Islanders were incapable of knocking over when their civilization collapsed, though many moai have since been re-erected. The pukao (a hat- or topknot-like adornment) is rarely seen, as are the coral eyes many of the statues once possessed. The statues as a whole are far from proportional, with the heads making up a considerable portion of their overall height, which varies considerably from statue to statue.

The Thief can get a Maoi-shaped "dagger".

The Thief can get a Maoi-shaped "dagger".