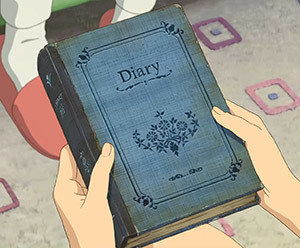 "I never travel without my diary. One should always have something sensational to read in the train."
— The Importance of Being Earnest by Oscar Wilde
Advertisement:

A Diary is a written work chronicling a period of time for an individual or entity. Diaries are similar to Autobiographies in nature, but are written in a daily format and are generally not intended for publication. Nevertheless, many diaries have been published, and give us great insight into the times, people, and places they center around.

The most commonly known kind of diaries are written by private individuals for their own use (also called journals or logs), but institutional diaries, such as business records, also exist. In modern times, the Blog, from the words "web log," has become a medium of choice for personal journals made public.

Diaries have existed at least since medieval times, although they could be older (one could make a case that the Meditations of Marcus Aurelius are a kind of philosophical diary, since he wrote them for himself and did so gradually over his lifetime). The earliest known were written by Japanese princesses and court ladies

. Religious devotees, male and female, used them for spiritual introspection and self-improvement. By the Renaissance, diaries held ordinary daily life events alongside personal thoughts and feelings. People also kept "commonplace books" to record quotations and ideas from other people.

Men and women from all walks of life have kept all kinds of diaries and journals, but they've become increasingly gendered over the last century or so. Partly due to the popularity in the Victorian era of fictional works in diary form, diaries became culturally coded as "feminine", in spite of the fact that some of the greatest diaries by men were written in this periodnote George Templeton Strong, the Goncourt brothers, Theodore Roosevelt. Even now, diaries tend to be seen primarily as a tool of women's empowerment

.note largely due to the immense influence in the 1970s of Anais Nin and her protégée Trula La Calle, author of The New Diary.. While both men's and women's diaries are covered in Thomas Mallon's A Book Of One's Own, there are no anthologies of men's diaries, while there are several anthologies

. This may be a social issue. Men may be teased for having a diary which forces them to be more secretive or use a Less Embarrassing Term such as "a journal". The Art of Manliness has this to say about diaries

and why men should keep them. More on diaries and journals from Wolf & Iron

, and here's an 83-year-old diarist who explains how keeping a journal or diary can benefit everyone

.note That is on the Epica website, and while a diary can be as simple as a spiral notebook or the backs of store receipts, one of the side trips of diary keeping can be the world of really nice blank books — buying them, or making them yourself. And using fountain pens. There are online communities with photos and discussion.

If you keep a diary and don't know what should be done with it after you die, consider giving it to the Great Diary Project

. Anyone who has old or unwanted diaries can be sure that Bishopsgate Institute will take them gratefully and look after them.

Diaries are generally Nonfiction, although they can be used as a story-telling device for fictional works as well and may contain works of Fiction within the Diary itself. Fictional diaries are easy to publish in serial formats like the Web Serial Novel.

Diaries actually seen in fiction are odd animals once a little Fridge Logic is applied. They'll often have everything across a person's life in one book, whereas people who actually keep diaries know eventually you fill one book and have to start a new one (depending on how verbose you are being). Also characters may flip through a diary and it will be full to the end, despite the fact that most in-progress diaries could be at any state of completion. When pages are left blank in a diary, the immediate assumption is that something has happened to the diarist; he wouldn't leave his book behind.