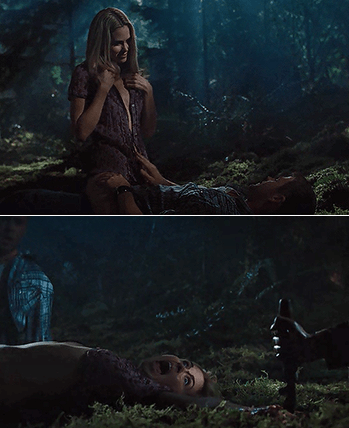 The horizontal tango will be your last dance.
"There are certain rules that one must abide by in order to successfully survive a horror movie!
For instance, Number 1: You can never have sex. Sex equals death, OK?"
— Randy, Scream
Advertisement:

Well, the young couple had sex. You know what this means—they are doomed.

Shows where lots of people die tend to have a strange conservatism about who gets killed. If anyone engages in nonmarital sex, especially unprotected and/or with someone they don't really know, you should probably consider them to have a crosshair on their back, even if the killer is choosing their victims totally at random. Fanservice Extras are particularly vulnerable to this trope.

Very common in slasher movies, such as the Friday the 13th series, and the entire basis of such Dark Fantasy and Supernatural Thriller films as Liquid Sky and It Follows. This could be a metaphor for the AIDS scare (then-new in the case of older films), or for STDs in general, although according to one of the makers of A Nightmare on Elm Street, it was simply because he thought that people having sex will forget about everything else and be especially vulnerable to serial killers. Which wouldn't be an Ass Pull if they only died during sex, but when they're prone to it afterward, it is hard not to interpret it as anything but a cautionary message.

If a character doesn't die but is doomed for having sex, it's Downfall by Sex. For a literal application, compare Out with a Bang, Death by Childbirth (yeah, we know...), Curiosity Killed the Cast, and The Murder After. For the lite version, see Kiss of Death. Mate or Die is the inverse of this trope. Contrast Her Heart Will Go On, where the man is doomed, but the woman has Contractual Immortality. Also contrast Glad-to-Be-Alive Sex, which is supposed to be the opposite (two lovers have sex after surviving something that threatened to kill them; it's possible to combine that with this Trope, but only by the cruelest of authors.) In some cases, the doomed man will leave Someone to Remember Him By (Hur, hur, hur...). Don't even get us started if it's with the same gender. Compare Cartwright Curse where death can happen even before the sex merely for being a love interest. Sometimes a consequence of Can't Get Away with Nuthin'. Often takes place at a Make-Out Point. May also be committed by the family members of one or both parties involved, who feel that the act of sex (or acts leading up to the sex) are seen as an affront to Family Honor.

The Literal Man Eater is a particularly twisted sister trope to this one.