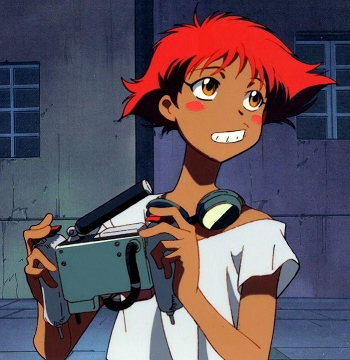 Like most character design decisions in anime, colors are often chosen to reflect personalities more than to be realistic depictions. Although dark skin is not a particularly alien choice, it's more often used to reflect a bouncy, energetic, fiery personality than actual nationality. This probably has roots back to the ideal of Japanese beauty including pale skin, as opposed to the chain of association with tanned people being outdoorsy, and thus lively and adventurous. Add in Western associations with red hair, and you get a boisterous adventure-seeker. Bonus points if they have gold eyes.
Advertisement:

This trope can be Truth in Television thanks to dye; notably, in Asian countries like Pakistan, dyeing hair red with henna dye is common. (Natural redheads in Pakistan—yes, they exist, especially among the Pashtun population—usually have light skin.) Dark skin with natural red hair is often seen in Oceania, especially Vanuatu and Papua New Guinea. In other places, you generally only see natural red hair in cases of mixed ancestry. For example, the Afro-American activist Malcolm X earned the nickname "Detroit Red" due to the reddish tinge in his hair that he inherited from a Scottish ancestor. Likewise, basketball player Blake Griffin has tan skin and red hair due to having a black father and white redhead mother. But the condition called rufous oculocutaneous albinism also causes red hair in a person with dark skin.