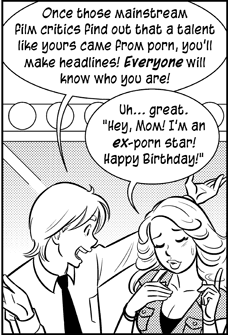 Moral judgeyness aside, it’s just weird from a fandom perspective how a lot of popular VN franchises started out as niche porn that was later cleaned up for general audiences – there’s this whole aspect of the IP’s history that you have to awkwardly skirt around any time the subject comes up in polite company. Like, imagine if Batman’s first known appearance had been in an oddly high-budget Tijuana bible, and every time a comics industry thinkpiece wanted to name-check the iconic page depicting the first time he donned the cowl, they had to discreetly crop out the panel where he’s getting railed by Superman."
— David J Prokopetz

Many characters have a past connecting them back to a previous sometimes-unwholesome work.

This often happens from being derived from early drafts of other works of the authors, especially creators who worked in the doujinshi industry: limited runs of self-published fan comics. Some kinds of dōjinshi happen to feature original characters and also be outright pornographic in an attempt to gain some quick capital with fans, creating the potentially unsettling feeling the character started in the mind of the author with an unsavory tone. For some artists, this can be a little awkward, but the attempt to hide it (as voice actors do under an assumed name) is pretty futile in practice. Some professional artists go the other route, and may continue to draw dōjinshi distinctly separate but still featuring their own characters.

Because of the different attitude toward such things in Western society, this can be a shaky prospect, as many artists become well-remembered for their racier art, and often make attempts to distance themselves from it.

See also Old Shame, I Was Young and Needed the Money, Rule 34, Rated G for Gangsta, Tamer and Chaster. Hotter and Sexier is often the opposite of this trope. Fanservice is a more different kind of opposite. Not to be confused with literal bleached underpants.