Party Members is a 2016 novel by Arthur Meursault, published by Camphor Press. 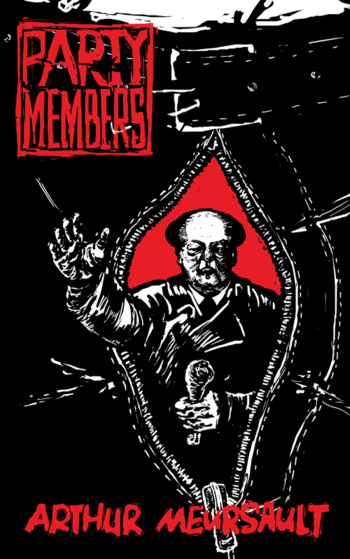 Treat the world like a leftover bucket of KFC. Just shit all over it.
Advertisement:

Deep within the heart of China, far from the glamour of Shanghai and Beijing, lies the Chinese every-city of Huaishi. This worker’s paradise of smog and concrete is home to Party Member Yang Wei, a mediocre man in a mediocre job. His content life of bureaucratic monotony is shattered by an encounter with the advanced consumer goods he has long been deprived of. Aided by the cynical and malicious advice of an unlikely mentor, Yang Wei embarks on a journey of greed, corruption, and murder that takes him to the diseased underbelly of Chinese society.

Will Yang Wei achieve his ambition of promotion to the mysterious eighth floor? Will he win the love of his beautiful but materialistic colleague, Rainy? And will his penis stop telling him to eat at fast-food restaurants? Just how far will Yang Wei go to achieve his pursuit of wealth, glory, and a better car?

Party Members is a bleak and black comedic fantasy about a world where to get rich is glorious, no matter who gets hurt in the process. Designer handbags, sex, karaoke, and shady property deals combine to paint a picture of modern China unlike anything seen before.