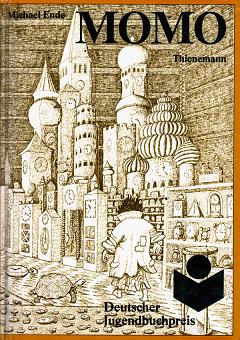 Lots of things take time, and time was Momo's only form of wealth.
Advertisement:

Momo is a German fantasy novel written by Michael Ende in 1973. An English translation has been published in 1974 as The Grey Gentlemen, and again in 1984 as Momo.

Momo takes place in an unnamed Italian town which is home to the eponymous homeless girl, who is known to be wise and has an almost supernatural ability to listen and help people come to terms with their problems. At the beginning of the book she leads a happy life, living in an old amphitheater on the outskirts of the city, surrounded by a community of friends who bring her food and share their problems with her. One day strange men with pale skin, grey suits, and grey hats appear in town and offer people to take their spare time into an account and pay it back with interest at a later time. More and more people agree to the offer and give away more and more of their spare time, and gradually give up any activities that are not considered completely necessary and eventually lose all their emotions. When the grey men approach Momo, one inadvertently reveals that that they are trying to drain the people's time away for their own uses. And unlike everyone else in the city, Momo can remember them after they have left.

One night, a tortoise named Cassiopeia appears and leads her to the house of Master Hora, who guards the stores of time against the grey men, but needs Momo to help him. Meanwhile, the gray men are bringing all their powers against her, since they know that she is the only one who can stop them.

A film was made in German in 1986. Michael Ende involved himself in the production of the film, after having been disappointed in the adaptation of The Neverending Story.

On 2001, an animated adaption was made in Italy.

Not to be confused with Momo, the English translation of La Vie Devant Soi by Romain Gary, or the infamous Momo. Ducks or winged lemurs also have nothing to do with this story.