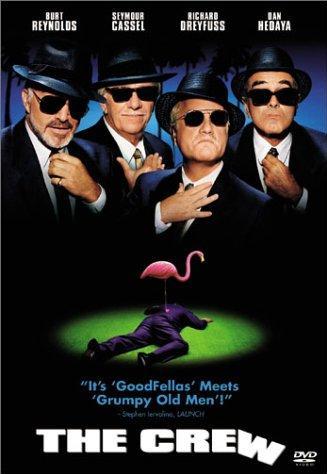 The Crew is a 2000 crime comedy film directed by Michael Dinner, and written by Barry Fanaro.

The titular Crew is a group of four wiseguys: Bobby Bartellemeo (Richard Dreyfuss), Joey "Bats" Pistella (Burt Reynolds), Mike "The Brick" Donatelli (Dan Hedaya), and Tony "Mouth" Donato (Seymour Cassel). Except that, instead of the glory days of the '50s, they are now senior citizens living in Miami. Worried that they may lose their apartment rooms due to a landlord raising rent for the new, young tenants, the Crew gets the idea to fake a mob hit in the lobby...only to find out that the corpse they used was the father of a drug cartel's boss. Things quickly get quite crazy for the men as they try to avoid not only the Cartel's wrath, but also avoid the ongoing police investigation...which just happens to be led by Bobby's long-lost daughter.

Not to be confused with the comic series or the racing game.

This film makes use of the following tropes: