Film / Crimes of the Future 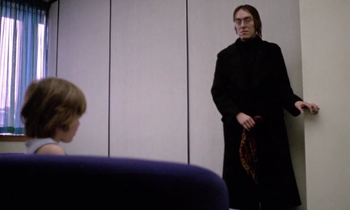 "Well, this is awkward." note In this scene, Adrian Tripod is being "directly introduced to the subject of his study."

David Cronenberg's 1970 No Budget student film, Crimes of the Future is run silent with the protagonist narrator doing a voiceover much like his previous film Stereo, except with the footage all shot in full vivid color. The rather sparse plot follows the strange experiences of one Adrian Tripod, Director of a former dermatological clinic for wealthy clients known as the House of Skin, as he travels around visiting various colleagues, employees, and clients of other nearby institutions. The previous Director was a mad dermatologist named Antoine Rouge who'd been studying the disease named after him that has killed very nearly all of the world's women, Rouge's Malady; after contracting a case of it himself (though he insisted it could not possibly be fatal to him), Rouge allegedly went into exile at some unknown location to die, leaving Adrian in charge.

After the House of Skin's one remaining client seemingly contracts a case of Rouge's Malady (causing him to secrete a mysterious substance Adrian and his interns refer to as Rouge's Foam) and disappears just as mysteriously as Rouge himself did, Adrian takes us with him on an odd journey through such organizations as the Institute of Neo-Venereal Disease, the Oceanic Podiatry Group, and the Corporation Metaphysical Import-Export, narrating his adventures in a kind of pseudo-documentary style. Along the way, he meets many odd personalities such as a former colleague who's contracted some strange kind of "creative cancer" that constantly causes him to grow numerous complete new organs with unknown functions, a foot massage therapist who's made an almost religious ritual out of his occupation, a man with a little bit of webbing on his feet, and a doctor with a number of dark glass spheres to which he claims to have an empathic attachment. Finally, Adrian meets two men he believes to be "heterosexual pedophiles" at the Gynaecological Research Foundation who've imported a little girl at great expense that they wish for him to join them in attempting to impregnate.

Put mildly, this Mind Screw of a film deals with some rather transgressive concepts; yet on the whole, it's more hypnotic and surreal than particularly offensive to the viewer's senses and sensibilities. Being highly experimental and only having been released to the public long after it was made along with other better known works, it has no apparent point to make, but does provide David Cronenberg's fans with some perspective on how he developed the skills and distinctive style that made so many of his later works so memorably offbeat.