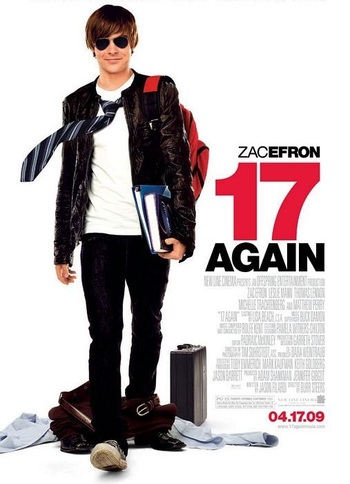 Who says you're only young once?
"Well, of course I want to live in the past. It was better there."
Advertisement:

Mike O'Donnell (Zac Efron) is the Big Man on Campus. He's the star of the high school basketball team, his girlfriend is the hottest girl in school, and he's about to be offered a scholarship. But his life takes a turn for the worse after he discovers his girlfriend is pregnant.

Flash Forward twenty years, and Mike (Matthew Perry)'s life hasn't improved. His wife Scarlet (Leslie Mann) has kicked him out, his kids Alex (Sterling Knight) and Maggie (Michelle Trachtenberg) both hate him, he's just been fired, and he's living with his geeky but much richer best friend Ned Gold (Thomas Lennon). After going to his old school to pick up his kids, Mike is approached by a mysterious janitor (Brian Doyle-Murray) whom he tells that he'd do anything to relive the Glory Days. On his way home, Mike sees the same janitor about to jump off a bridge. Rushing to save him, he topples over the edge and lands in a whirlpool.

When he crawls out and gets back to his friend's place, Mike discovers he's been turned into his 17-year-old self. Now he has a chance to sneak into the lives of his family and get another chance at the life he wanted.

Not to be confused for the year 2000 film Seventeen Again (2000) starring Tia and Tamera Mowry and Tahj Mowry.