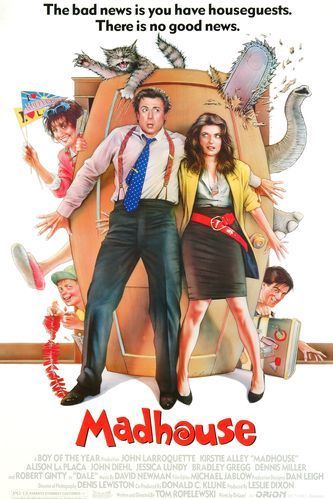 The Bannisters are a young couple, enjoying a comfortable existence in Los Angeles that seems to just be getting better. Mark Bannister is an up-and-coming stockbroker who's on the verge of making huge money for a big client. Jesse Bannister is becoming prominent as one of the hosts of L.A.'s biggest network news show. Life is looking good.

Then Mark gets a call from his cousin Fred, who's coming out to visit from the East Coast with his pregnant wife Bernice. It's only for a week; What Could Possibly Go Wrong?

Madhouse is a 1990 comedy that goes to answer just how bad things could get. Starring John Larroquette and Kirstie Alley as Mark and Jesse Bannister, it's basically The Thing That Would Not Leave, The Movie.

Not to be confused with the animation studio. Or the 1974 horror film.