Film / A Ducking They Did Go 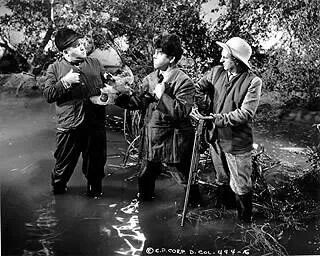 A Ducking They Did Go is The Three Stooges' 46th short subject, which was released April 7, 1939.

In this short, the Stooges run from a police officer after trying to steal a melon for food. They suddenly find themselves being hired for being membership salesmen of the Canvas Back Duck Club, which they sell to the police department and the mayor after their second run-in with the cop from the start. Little did they know, there aren't any ducks around, so the Stooges must find a way to find some before they're put behind bars.