Fanfic / Tale of an Industrious Rogue

If you could lend me an eye or two, I would like to tell you a tale, the tale of an industrious rogue... 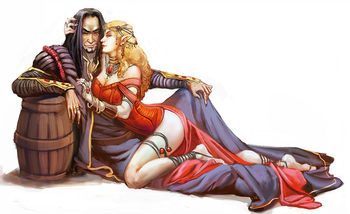 ) about a Pathfinder campaign that follows a rogue named Hassan and his party in the game setting of Golarion, in the city-state of Katapesh. After finding a rift into the Paraelemental Plane of Salt, the parties begins down journey of ever increasing greed and hunger for power forever changing the world around them. For the better? Probably not.

Tale of an Industrious Rogue provides examples of: